The southernmost wine farms in Africa

Take a trip down south and taste some excellent SA wines.

‘Die winter is verby, nou kom die wind’ – winter is over, now comes the wind, remarked an Agulhas local. This remote part of the world, known for its treacherous shipwrecking coastline is at a superficial level somewhat intimidating. Yet scratch beneath the harsh surface and you will find delicious wines and hospitable locals. 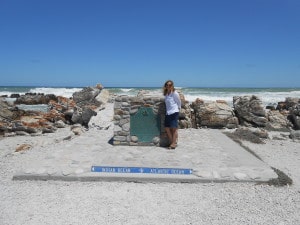 At Cape Agulhas – the tip of Africa where the Atlantic and Indian Oceans meet.

There is something distinctly romantic about tasting wine from vines grown at the southernmost point of the African continent, and not just ordinary wines but extraordinary, highly ranked wines competing with the best in the world. The Elim ward falls in what has traditionally been cattle and wheat country. Known for its biodiversity, the wine farmers established the Nuwejaars River Wetland Special Management Area dedicated to conservation of this unique part of the world where they have re- introduced hippo and buffalo. For those who take the road less travelled they will be richly rewarded.

Elim itself has a fascinating history as a Moravian mission station set up in 1824. Known traditionally for its thatcher’s, the name Elim is more and more associated with delicious Semillon and Sauvignon blends among the whites and full bodied reds.

If you approach the Elim wine route from Bredasdorp, you will come to Black Oystercatcher Wines. Here Dirkie Human has built a destination winery popular amongst locals and tourists. His fish braais are legendary and memorable coupled with his flagship White Pearl Sauvignon Semillon blend and a tranquil view across the Agulhas plains. The bulging organic vegetable garden which guests in the self-catering cottages are free to harvest is a foodie’s dream!

Dirkie Human is also the wine maker for Celestina, owned by Caroline Rillema of Caroline’s Fine Wines and her partner Ray Kilian. She has planted 1, 8 hectares in nearby Baardskeerdersbos and produced 2400 bottles in 2012. This wine displays the typical Cape Agulhas characteristics of minerality, raciness and gentle acidity and her sought after 2015 vintage is eagerly awaited. 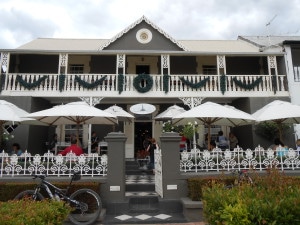 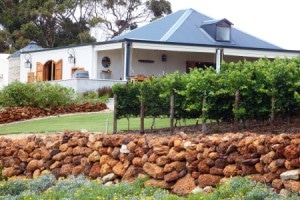 A few kilometres south and only 9kms from the sea you will find, Strandveld Vineyards which claims the title of the southernmost cellar on the African continent. Their First Sightings range refers to the original sighting of the South African coastline by the Portuguese explorers in 1488. One of their flagship wines holds the name Strandveld Pofadderbos referring to the deadly poisonous puff adders to be found in that particular vineyard. The bouquet is full of white asparagus, nettle and green pepper aromas and it tastes sublime. Tasting fee is R40 which is refundable with purchase. 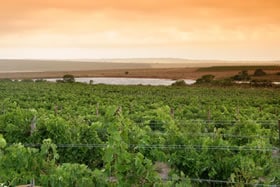 Changes are afoot at Zoetendal named for the Dutch shipwreck of 1673 and which will reopen to the public at the end of 2015 under the auspices of David Nieuwoudt of the Cederberg, as the new home of Ghost Corner wines. Staying with cattle and sheep the new owners from Upington recognise the quality of the soil and are happy to lease and cooperate with leaders in the industry such as Dave Hidden and Charles Bak to harness the terroir and coax delicious and memorable wines out of this somewhat harsh climate.

(Note – The Elim Fruit and Wine Festival will be held in October.)