Babylonstoren Hammam – a modern take on an ancient tradition

Early spring is a wonderful time to be in Istanbul – it is not too hot – or crowded. I was determined to experience an authentic Turkish bath in this extraordinary city straddling the Orient and Occident.

On returning to South Africa and waxing lyrical about it, somebody happened to mention that if I wanted another Turkish bath experience  I need not fly to Istanbul – especially in the light of recent terrorist attacks – but could instead drive up the N1 to Babylonstoren, which is exactly what I did. 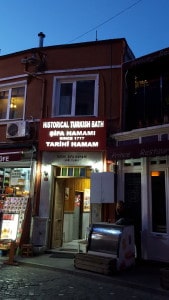 The entrance to the Hammam in Istanbul 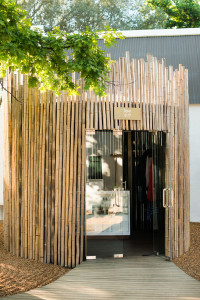 The entrance to the Babylonstoren Hammam

Nowadays, international visitors who are prepared to pay top dollar to stay in 5 star hotels, almost expect there to be a spa on hand. I must say after an international flight there are few things that transport and transcend one out of the daily grind and into an enhanced sense of wellbeing than a spa treatment.

My Babylonstoren Hammam, or Turkish bath experience, in their recently renovated spa, and the authentic one in Istanbul were quite different and yet equally pleasurable.

Arriving on a cold, grey, overcast, rainy day the idea of sitting in a hot steam-filled room and being given various water rituals was heaven. My BFF and I – always good to conduct research – especially of this kind – with a girlfriend – walked through the glorious garden with a few pale pink blossoms making an early appearance. On arrival at reception we were invited to go to the Change Rooms and get into white towelling robes. After a brief wait in the Recovery Room, we made our way across to the Hammam which is situated in a custom built area. 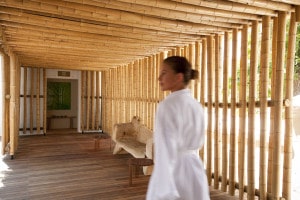 Revisiting my Istanbul Turkish bath experience, which my husband and I did together, once we were undressed we were led into the Hammam featuring a heated marble slab where we were instructed to lie. I must admit I felt a bit like I was being slowly poached. In Turkey we were then taken off to separate areas to be scrubbed, and then given a bubble bath. In her broken English my Turkish attendant said as she was shampooing my hair ‘I am your mama, you are my baby! Quite intense I admit, but still I felt like a three year old again! It was incredibly relaxing and we were served traditional apple tea in the central area, before enjoying an aromatic massage by Anna from Armenia. Heaven.

Back to the Babylonstoren Hammam where we took turns having our treatment by Nazlie who made us feel completely at home. Whilst in Istanbul my female attendant was naked but for tiny bikini pants, Nazlie was however suitably covered. Traditionally, Hammam treatments are performed separately according to gender but this is not the case at the Babylonstoren Hammam. The heated marble table accommodates one and we took turns receiving various water rituals, from scrubbing with a Turkish glove and then being washed down and my best – a bubble bath. The atmosphere of the gorgeous blue mosaic tiled Babylonstoren Hamman is very intimate – womb-like in fact with lots of female energy. 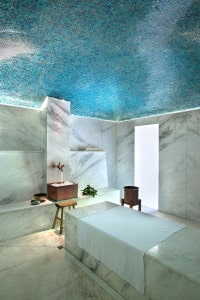 The modern, stylish interior of the Babylonstoren Hammam 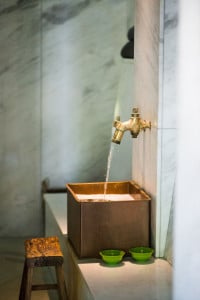 After being washed down and soaped and literally ‘tubbed and scrubbed’ we enjoyed fresh apple slices from the Babylonstoren trees. It was a modern take on an ancient tradition but well worth the drive into the Cape Winelands and something I would highly recommend to literally wash away the stresses of everyday life.

Disclosure: The Hammam experience was complimentary and I received a gift of a bottle of wine and the Babel cookbook.